The anterior cruciate ligament (ACL) in the knee is the central motion ligaments, which controls the motions in the knee joint, which ensures not only the displacement of the upper against the lower leg, but also the rotational and shearing forces of the knee controls.

The ACL “anterior cruciate ligament” consists of two bundles, which ensured at different positions of the knee joint.  Not only the stability forward, but also that rotary movements.

The cause of an knee anterior cruciate ligament “ACL” injury

A violent twist is the typical cause of a anterior cruciate ligament (ACL) – mainly in sports such as skiing, football, tennis or those with fast changes of direction at the same time fixed on the ground walking. In acute cases are immediately occurring pain, an immediate feeling of instability and liquid in the knee joint not unusual – often because the pain intense inner band is concerned with. It may by an anterior cruciate ligament knee injury but also occur a symptom poor interval in which there are few problems.

But as a missing anterior cruciate ligament (ACL) in the knee, permits increased rotational movements, increase the shear forces in the knee joint, which can lead to cartilage and meniscus damage and cause permanent damage over time, sooner or later. 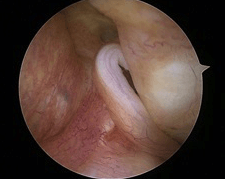 Depending on each individual case, the orthopedic doctors in Germany will recommend either an arthoscopic surgery (keyholes with instruments) of the ACL surgical or conservative method of treatment. For athletically active individuals, surgery is usually recommended. During an arthoscopic Anterior Cruciate Ligament ACL Surgery in Germany, the damaged part of the anterior cruciate ligament (ACL) will be removed and replaced with tissue from elsewhere in the body.

If an arthoscopic Knee ACL Reconstruction Surgery is necessary, the orthopedics at leading hospitals in Germany performing the surgery arthroscopic (minimally invasive with instruments). You stay 3 nights at of the best hospitals in Germany and you get a knee brace special designed after ACL surgery.

4.) You get a knee brace after the ACL Reconstruction Surgery wearing 6 weeks

5.) Either you fly back home on the 5th day after surgery or you start with intensive physiotherapy in Germany.

6.) Physiotherapy by professional physiotherapists of 3-4 weeks is recommended after knee ACL surgery.

We connect you with experienced and leading doctors for arthoscopic Knee Ligament ACL Surgery in Germany.

How to book or request a quote

To get a quote for a arthoscopic knee ACL surgery from Germany, send your medical reports to us. Make sure you provide a MRI scan not older than 6 month.

We discuss the situation of your knee ACL with 2-3 top leading hospitals in Germany for and sending you the quote after. We consult to get the best solution and offer.

Simply book the best orthopedic hospital for the knee arthroscopic ACL surgery in Germany. We are organizing and coordinating your appointments, admission and discharge.